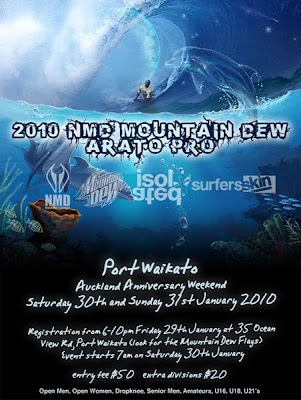 For the third year in a row Port Waikato will be the location of one of the biggest events of the NMD/Mountain Dew BBSNZ Tour. With over 70 competitors in 2009 the Port Waikato event has been gifted with excellent waves the past two years and hopes are high that the trend will continue for 2010.

With a host of New Zealand's top bodyboarding talent on show at this event it is set to be a great spectacle. 2009 Open Men¹s tour champion Mitchell Tombleson (BOP) will be hoping to continue his excellent form from last year with a strong showing at Port Waikato. 2009 Dropknee and U18 tour champion Luke Elliot (BOP) will both return for another crack at the NMD/Mountain Dew Arato Pro and will hope to make a strong start to the competition year. Local youngster Willy Nepia-Murray will be backing up from taking out the Amateur and U16 tour titles in 2009 and will hope to become more of a force in the U18 and Open divisions through 2010, especially at his home break.

There will be daily event updates on www.isolated.co.nz
at 2:38 PM No comments: 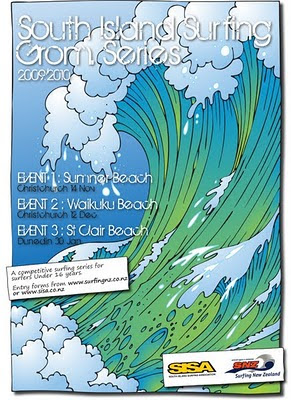 The final and deciding event of the South Island Grom Series will be held at St Clair Beach in Dunedin on the 30th Jan. The first two event of the series were held in Canterbury and scored great waves at Te Oka Bay and Taylors Mistake.

Young surfers from throughout the South Island will travel to Dunedin to compete. Cody McCusker (Kaiapoi) currently leads the U16 Boys ratings after winning the last event at Taylors ahead of Sam Courtney (Kaiapoi). Max Cooke (New Brighton) leads the U14 Boys. In the U12 Boys Harrison Whiteside (New Brighton) has a thin lead on Max Marshall (Sumner). Alethea Lock (Sumner) leads the U16 girls ratings.
at 2:26 PM No comments:

Feedback: from the Surfer magazine forum

Google is an amazing thing. Trawling the internet yesterday resulted in this wee gem — posted by 'Silly' on the Surfer Magazine forum. Thanks Silly, whoever you are!

"seventhwave is for real
they make great wetsuits that last for many seasons
2 of my mates got 2006 xcels cuz we like their booties but both wetties fell apart first season very disapointed
get a seventhwave you wont regret it
also both seventh wave and bodyline make suits for tall skiny guys
im 6 3 and and skinny ...
all the name brands are for shortarses
i need to get xxls and they are to loose on me
seventhwave is a very popular suit on the eastcoast of the south island and the Caitlin's
some of the coldest and heaviest waves round
i dont need their top of the line suit up in the north but if i ever move to dunnos (ice cream headaches for 8 months a year and 4/3 all year round) then seventhwave would be my suit of choice by a country mile"
at 11:36 AM No comments:

Email ThisBlogThis!Share to TwitterShare to FacebookShare to Pinterest
Labels: feedback 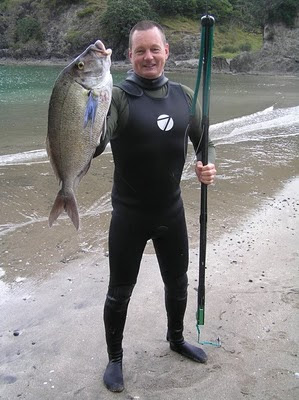 "Yes, totally delighted with the new wetsuit, although this 10 pounder fish wasn't so pleased to find me sneaking up, in my new olive and black outfit!

Not bad for a first outing, eh? Have had a great summer spearfishing so far, the suit is perfect. Very flexible and comfortable, the custom fit is spot on.

Great product, great service, and the rest of the Waterline team are getting themselves measured up for a custom fit now.

Brian Rogers
Director
Sun Media Ltd.
at 10:56 AM No comments:

Who said there's no waves in Christchurch? 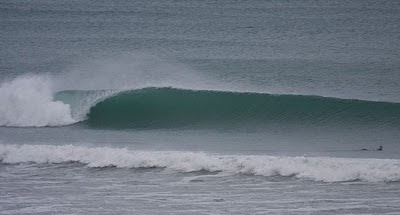 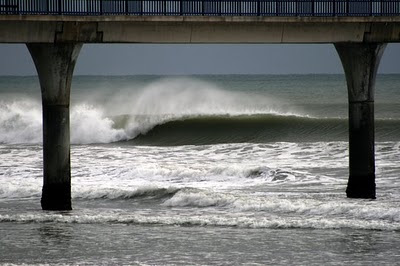 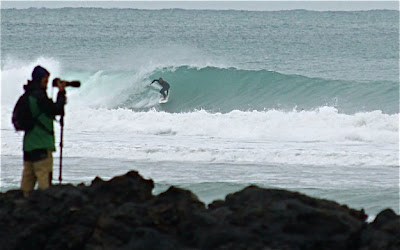 We've been lucky this last week or so. An epic East swell fired up a lot of our local spots (and local surfers), with an abundance of waves hitting Sumner Bar and New Brighton Pier. Here's a few pics from the Surf.co.nz 'Shot of the Day' series to prove it!
at 11:16 AM No comments:

Email ThisBlogThis!Share to TwitterShare to FacebookShare to Pinterest
Labels: waves 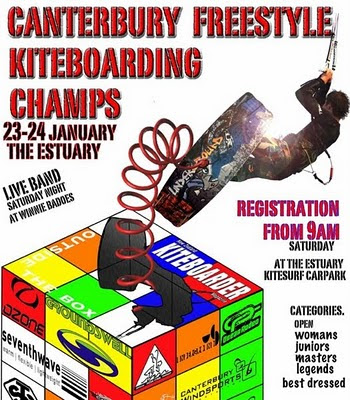 Look who's back in town! 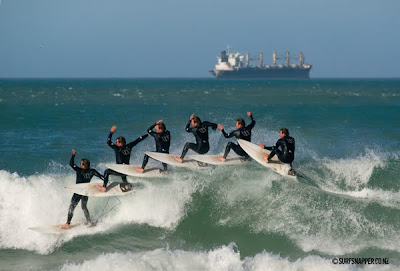 Snapped at Taylor's Mistake, "Wazza" (Warren Finlay) is back in town and shaping at Barron Surfboards. Welcome back to Christchurch, Wazza, we've missed you all these years you've been hanging in Oz. Also, Mr Barron has a new website you can check the latest sticks on http://barronsurfboards.co.nz. Thanks for the photo Andy.
at 10:15 AM No comments: 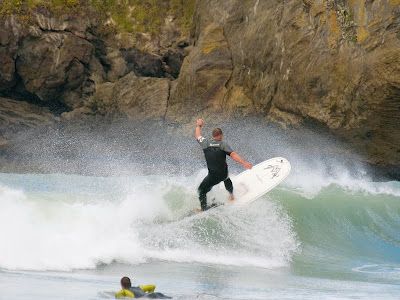 SISA committee member and Waimak Bar legend Lewis Joyce heads south and scores after the South Island Grom Series at Taylor's Mistake. Nothing like a couple of waves and corona's after a big day judging!
at 9:54 AM No comments:

More than 200 representatives from 21 countries from around the world marched behind their national flag bearer through the city's Mission Bay in a tremendous display of surfing unity.

The Sands of the World ceremony kicked off proceedings with team captains from each country pouring sand from their local beaches into the ISA clear box, symbolizing the peaceful gathering of nations through the love of surfing.

“Welcome everybody,” said Aguerre. “I know this is the most emotional opening ceremony I have ever attended. I have been doing this for many years. Kia Ora is a very important word that we should all learn. It means thank you in Maori, it also means welcome, it means from the heart. So, Kia Ora New Zealand, Kia Ora Auckland!”

The National team of New Zealand officially welcomed the other nations by performing their traditional Haka dance to cheers from the large crowd that gathered for the opening ceremony.

Watch it live here: http://www.isaworldjuniors.com
at 9:18 AM No comments: 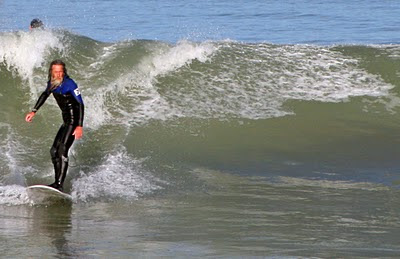 This sic pic arrived in our inbox yesterday — Doug Singer, charging at Waikuku. Thanks to Kyle for the pic.
at 9:46 AM 1 comment: 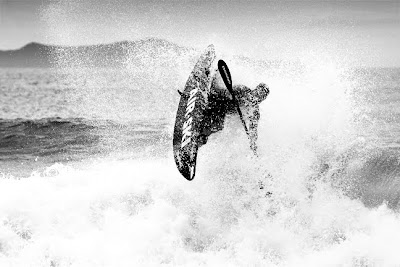 Kayaksurf.net: You won last year's USA waveski championships. Tell us how did you do it...

This contest for me was a highlight in my surfing life, the competition was so well organised and all of the people made me feel so welcome: it was a pleasure to compete. Everything went right for me in this event, I won every heat and the final of the seniors and open. And I have learned from this comp that the more relaxed I am the better I surf, instead of getting stressed and over-thinking everything, so the whole thing was well worth the trip...

Read the entire interview here or watch a video of Tony here!
at 5:06 PM No comments: