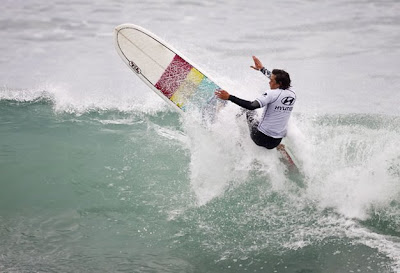 The hotly contested Junior Division of the Sandy Bay leg of the Hyundai Longboard Tour saw Seventhwave ambassador Luke O'Neill (Sumner, Chch) and Nic Jones (Australia) put on a stellar performance for the crowd. O'Neill, who is the current Under 18 Boys National Champion, surfed with style well beyond his years and his nose riding ability was world class.

O'Neill's main opponent, Jones (AUS) is one of Australia's top juniors and both surfers executed some of the best hang ten's seen at the event. However, it was O'Neill who won the battle winning the final. Hone Douglas (Whakatane), who was stand out in the early rounds didn't quite get scores required placed third with fellow Whakatane surfer Joseph Stewart coming fourth.

Congrats Luke from the team at Seventhwave! For more on the Sandy Bay event check out the full report here.
at 4:02 PM