This is a quick intro to New Zealand made bugging sport


With the Riverbug, Wildwater Designs set out to design a river tube that is capable of running harder river rapids. The result is a whole generation of general purpose high-tech tubes that are both sleek and sturdy.
Comparing an inner tube to a Riverbug is like comparing a Model T Ford to a Lamborghini

The Standard riverbug is an all-purpose bug, and is stable and easy to use. It is the ideal bug for beginners and intermediates to use on a river, whether it is a float trip, or involves rapids. Experienced bug paddlers can run Grade 3 river rapids in standard Riverbugs. 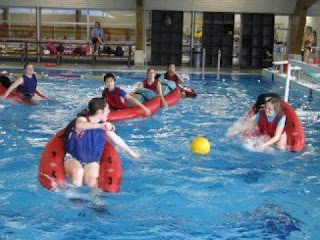 Bug Polo is a game played during winter at an indoor swimming pool. Players sit in the River Bug and propel themselves with the fins on their feet. The game itself is a cross between netball and water polo.

Email ThisBlogThis!Share to TwitterShare to FacebookShare to Pinterest
Labels: Bugging