All SEWN up in Sumner 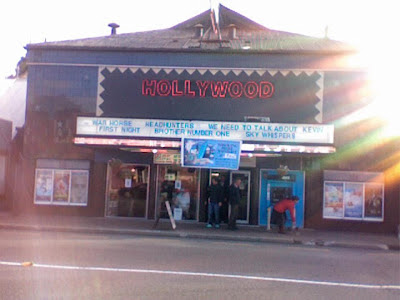 Close to one hundred happy film-goers turned up to Sumner's iconic Hollywood cinema last Friday to witness the first New Zealand longboarding film in over a decade: SEWN. The fact that only three seats were left in the theatre is a testament to the buzz this movie has created, and viewers weren't disappointed. After an introduction from film maker Nicolas Brikke, we were treated to a well paced, well edited and interesting documentary canvasing four corners of the North Island and a few hand-picked inhabitants.

There was a good balance of storytelling and surfing, and both were interesting in their own right. Nicholas had done a lot of work getting to know the interviewee's and earning their respect, and you could tell. Humour, birth, belonging, place, community—all themes that were skillfully investigated without being forced, and which left us wanting to know more. Indeed, the film could have been slightly longer without losing our attention, a nod to the year's worth of editing. The surfing — a range of waves and different boards, all ridden with a different twist — was great to watch, and was reinforced with some memorable quotes on the nature of board ridding, and what it actually means to ride a longboard. Surfers? Tanner and Lillis' styles shone through in this one, but all surfers had a more than enjoyable section.

Coupled with the personalism and surfing footage was a decent dose of kiwiana — scenery shots, indigenous perspectives, and a home grown soundtrack (featuring the Phoenix Foundation and others). The result? SEWN is a great documentary that should be watched by longboarders and the non-surfer alike. Think Endless Summer appeal but in a New Zealand context; the kind of movie you could show the entire whanau without getting bored yourself.

After Q&A with Brikke, the night ended with an after party at The Thirsty Mariner, where punters enjoyed beers and bonus features from the film. Favourites were the wipeouts, the timelaspe segment, and Roger Hall's wooden surfboard process.

If you missed this live, then be sure to grab yourself the DVD. You won't be disappointed.
at 3:52 PM