Shot of the day: a blue whale! 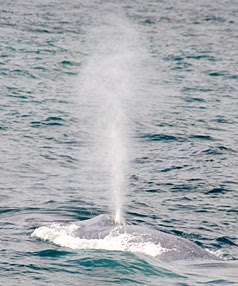 Sightseers onboard a Black Cat cruise got their money's worth yesterday when a blue whale surfaced next to the boat. Black Cat Cruises Managing Director Paul Bingham said the increase of whale sightings off the Canterbury Coast was “certainly proving to be a bonus”.
“Black Cat has been operating for twenty five years and over the last twelve months we have seen more varieties of whales than ever before off Banks Peninsula.”
Sightings have also included a Fin Whale, Orca, Curviars Beaked, Humpback, Pilot and Southern Right Whales, as well as Hector dolphins. Larger than 25 elephants, the blue whale is the largest animal ever to live on earth but numbers have been severely depleted due to commercial whaling. Today the number of blue whales in the southern hemisphere is estimated at less than 500, compared to 250,000 prior to commercial whaling.
at 3:34 PM