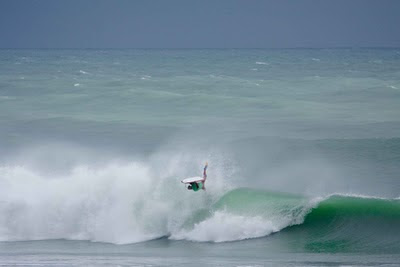 Over Queens Birthday weekend Dunedin’s Ben Mackinnon won the Open Men’s, Senior Men’s and the overall New Zealand Bodyboard Tour Champion Title in one hit. All with one event left to go in the tour in late October.

The Blaketown challenge was run over Queens Birthday weekend the 5-7th June 2010 in Greymouth. The ‘barber’ was in full force first thing in the morning with howling offshore winds powering down from recently snow capped mountains. Large and tricky conditions greeted riders with heavy and straight closeouts lining the beach. Judges rugged up well in sleeping bags, puffer jackets, nana’s old blankets and anything that they could find in order to fight the frigid conditions. Competitors surfed in sleet, hail and freezing rains braving the cold to put on soaked wetsuits and to put on a show of high performance Bodyboarding for those who came to watch.

“I really went for it you know. I had injured my neck from a large aerial move the night before the contest and ended up living off pain killers and hot showers to push through. But the competitions had a few great riders who came out of the wood work to compete and it just pushed me to suck it up and push through.” Mackinnon said.

With powerful drifts on the west coasts and flooding rivers competitors were asked to paddle like they had never paddled before with one competitor getting sucked out in front of the river mouth and down to another beach across the river over a kilometer away. Mackinnon hit many large inverts, a move where the wave is used a ramp to propel the rider up and out in front of the curl, all while the rider extends his body and boards then brings it back at the last moment before landing. No easy task in double over head waves. He also executed many Back flips out into the wave flats. With a possible maximum heat score of 20 out of 20 for two waves Mackinnon posted 19 out of 20 with a perfect 10 for one of his large aerial off the heavy closeout sections.

By winning the overall title for 2010, a title which he won in 2008, Mackinnon will be invited to the largest event on the Bodyboarding World Tour. The Pipeline Pro in February 2011 held on the north shore of Hawaii. Mackinnon will start in the 5th round of the main event allowing him to miss many of the earlier heats and compete against the world’s best professional Bodyboarders.

Mackinnon said he was stoked with the result. “I really wanted this win and really meant a lot to me. I have never won here in Greymouth before and it’s just a really special event, an event that is a huge part of New Zealand Bodyboarding and one your peers really feel matters.”

Mackinnon is currently on a break from riding to let a few injuries heal. In November he will compete with the New Zealand team at the Australian national Titles on the Gold coast then he will begin his build up to the Hawaiian event, training which involves a lot of underwater lengths, breath hold training and Pilates.

He is currently studying massage therapy at Otago Polytechnic and working towards financial sponsorship for the Tour event in Hawaii in February. His current sponsors are Seventhwave Wetsuits, R and R sport, Isolated Online Bodyboard Shop, Back in Motion Physiotherapy and NMD Bodyboards.
at 12:05 PM