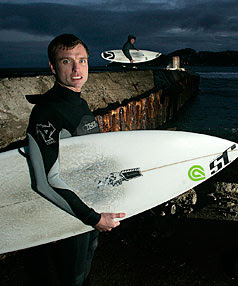 Night surfing could come to Lyall Bay in a proposal that would see floodlights in street-level bunkers shine across the waves.

Wellington Boardriders Club wants to set up what it says would be the world's first permanent, purpose-built night-surfing facility.

One option would be the installation of three sets of floodlights, in three bunkers about 30 metres apart, along Moa Point Rd beside Wellington Airport.
Boardriders spokesman Kristin Savage (see picture) said the lights would shine across the water at the eastern end of the beach – called The Corner.

"Night surfing will double the supply of good waves by extending the time you can surf."

A proposal from another group to build an artificial reef to bolster the number of good quality surfing days, which it estimated at 27 each year, has lost traction.
The Boardriders club did not know how much floodlights would cost, Mr Savage said. "At this stage we think we could pay for it by a combination of corporate sponsorship, grants, and by structuring our membership fees around the cost."

Kilbirnie-Lyall Bay-Rongotai Progressive Association president Steven Moore did not think many residents would oppose the lights.

But if Wellington City Council was asked to provide money, there might be some.
Council spokesman Richard MacLean said its concerns would be around what the lights looked like and how secure they were.

Airport chief executive Steve Fitzgerald said an earlier Boardriders proposal to put the floodlights on poles had not been supported.

"The Civil Aviation Authority specifies a zone around an airport where particular care must be taken, to ensure any lighting will not interfere with flight safety at the airport. [But we] would be happy to work with the Boardriders and the CAA to ensure that any new proposal meets all of the aviation safety requirements."

Head to stuff.co.nz to read comments about the proposed plans and to write your own
at 10:43 AM