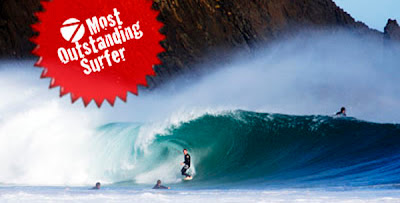 The Seventhwave Most Outstanding Surfer Award (MOSA) is proving to be popular with the South Island Circuit competitors. At the Westport Cape Classic Anthony Hema took out the Grand Prize of a customised wetsuit of his choosing, and punters were poised for another round of judging in Greymouth.

Held over Waitangi Weekend, the waves on offer at Cobden meant many contenders were in the running. In the end, it was Dave Watkins who pipped James Washer and Sam Sands for the second-ever MOSA award. His outstanding surfing was a step up in personal performance, and he was unlucky not to progress further (incurring an interference in the Seniors). Hopefully a customised suit is some consolation.

Next up: the Canterbury Champs in March.
at 2:14 PM