After Friday being a lay day due to terrible weather and onshore winds the 2012 Jucy/NMD South Island Bodyboard Champs Kicked of at 7am Saturday 19th October at St Kilda beach Dunedin.

This event was the last event on the newly restructured BBSNZ National Tour, and there were quite a few national titles on the line that would be decided in Dunedin.  The competitors were greeted with a nicely groomed swell from the SE direction and perfect offshore winds, waves were in the 3-4ft range and looking sick! After a quick briefing on the conditions and the competition format the first of the riders hit the water. 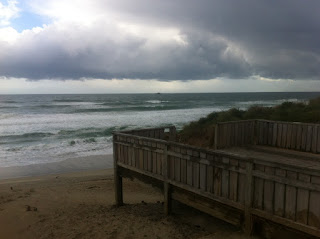 Up first was the Jucy Open Men’s division. All the competitors were keen to hit the water with some pumping waves on offer! Showing some early form was Ben McPaike (Greymouth) with a solid projected forward spin off the lip. Hot on his heels with arguably the wave of the comp was Jeremy Gantley (Dunedin) he lucked into a solid 4ft wedge which gave him a very deep tube which he came screaming out of and boosted a roll off of the next section, unfortunately he didn't stick the landing but he still scored high with the judges. Gavin Murdoch came out of the woodwork after shifting to Dunedin from Auckland and put on his fins for his first heat in 5 years, he quickly showed he hasn't lost any of his skill, picking of a couple of sick tubes. The other standout was Jolan Kilkelly (Greymouth) he went on to take out his heat with a couple of high scoring rides. 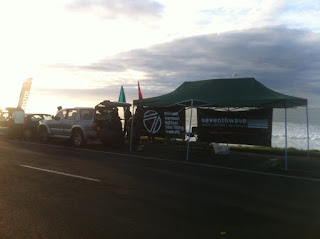 Next to hit the water was the Surfers Skin U18 final and the Mountain Dew Open Women’s final both went out together because of low numbers (due in part to the terrible forecast) and because they were all from the same family!! The Vujcich's drove all the way from Napier for this event, which was a superb effort from a keen bodyboarding family!! In the Surfers Skin Under 18's we had Chris Vujcich, Alan Vujcich, and Charles Vujcich. In the Mountain Dew Open Women’s was their Mum Marguerite Vujcich. All 4 went out and traded waves for the 30 minute final, all of them showing that they have come a long way in their first year of competition, very pleasing to see!! Taking out the Surfers Skin U18's was Charles, second went to Chris and 3rd went to Alan, and Marguerite took out the Mountain Dew Open Women’s. It is great to see this commitment from the Vujcich clan and we hope to see them back in the years to come!

With the conditions looking at their best the call was made to put the Jucy Open Men’s division out for their final. Ben McPaike (Greymouth) came out charging and got a good first wave under his belt with a cutback to forward spin finished off with a reverse resulting in a good score for the combo. Gavin Murdoch (Dunedin) also started strong with a nice tube on a left-hander. Jeremy Gantley couldn't get into the right spot through the final with his earlier cramp possibly making a comeback. It was Jolan Kilkelly (Greymouth) though who stole the show with a couple of good waves to snatch a very narrow victory of 0.2 from fellow West coaster Ben McPaike (Greymouth) Gavin Murdoch (Dunedin) took third place and Jeremy Gantley (Dunedin) took fourth. 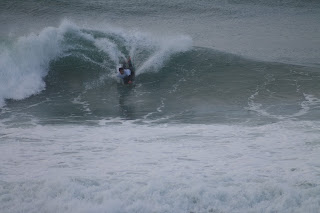 The Seventhwave Senior Men were up next in what was to be the last heat of the day. These are old guys of the bodyboarding scene in NZ and to enter this division you need to be 28 or older at the start of the year. Jolan Kilkelly (Greymouth) and Gavin Murdoch (Dunedin) stayed out in the water from the final of the Jucy Open Men’s both looked quite tired but battled on. The conditions had changed a bit by this stage with the tide dropping and a very light sea breeze coming up. It was local boy Aiden Dixon (Dunedin) That managed to sneak away with victory followed very closely by new local Gavin Murdoch (Dunedin) with Jolan Kilkelly (Greymouth) in third and Brad Dennison (Timaru) in fourth place.

The Dunedin event is always held in the memory of local bodyboarder Dion Wells who sadly passed a number of years back. Unfortunately another local bodyboarder in Dan Wadsworth was also lost to us in the past 12 months and both guys were on our minds throughout the event. Our respects to both of their families and may Dion and Dan both be eternally barreled and hitting perfect ramps on the other side.

A big thank you to all that helped make this event possible especially the sponsors: