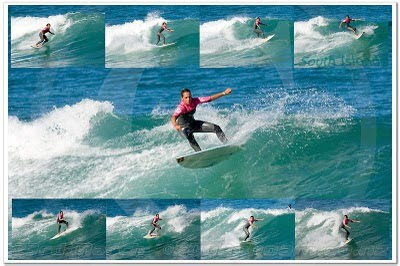 Hema won the Open Mens in trying conditions, 3-4 ft low tide sweep at The Channel near the Cobden breakwater. With two high sixes, Hema took the Gold and dedicating his win to his late father. 2nd was Christchurch's and defending champ Hayden Brain, with the highest wave score in the final could not back up the score during the 30min final, until 15 seconds after and caught a wave that could possibly been the score he needed. 3rd was Kaikoura's Sam Dunfoy, who took a early lead, and in 4th, Craig Grimshaw who seemed to have been sweeped 100metres north due the river like drift.

Seventhwave team rider Kristi Zarifeh started with a great opening wave which proved too much for her fellow competitors, taking home the win and the gold. Congrats to her, Alethea Lock and all the other competitors. More pics and video to follow.
at 12:05 PM