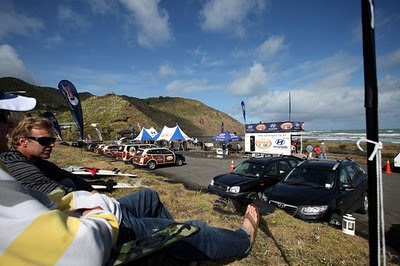 The final event of the Hyundai Pro Longboard Tour got under way in wild conditions at Port Waikato yesterday (Friday 26th March). The conditions made for a difficult playing field with the top longboard surfers in New Zealand vying for the Tour title.

Surfers had to battle with a large 3.0m swell and strong south west winds to kick off the day. Despite predictions of winds easing it was not to be.

The conditions didn't take away from the fact that this year's Port Waikato event is the richest ever on the Hyundai Pro Longboard Tour with over $6,500 in prize money up for grabs as well as a tonne of other prizes spread across the six divisions being contested.

At the centre of the event is the tightest title race in recent years with leading surfer Dylan Barnfield (Ohope) defending his current number one standing from Thomas Kibblewhite (Auck) and Daniel Procter (Gis) as the two surfers most likely to challenge him for the Hyundai Pro Longboard Tour win. Owen Barnes (Mnt) is the fourth surfer in the mix with an outside chance of taking the title
Full run down of competitors and results so far here.
at 10:49 AM