Wednesday the 17th of March will be remembered as surfing's greatest St Patrick's Day ever! A giant low-pressure system, creating a massive 15-20ft swell that developed and battered the New Zealand coastline then intensified in the Pacific gaining strength and size on its way to Teahupo'o in Tahiti.

All surfers regard Teahupo'o as the heaviest and deadliest wave in the world. This is due to the combination of big open ocean swells breaking from extremely deep water onto very shallow coral reef. This causes the wave to break below sea level and with no back to the wave.

When Teahupo'o gets big the only way to ride it is with the help of personal water craft (Jet Skis), not only to get into the wave but also to save any surfers that wipeout on the reef.

Having already surfed Teahupo'o twice before with one particular wave getting nominated for biggest barrel and ride of the year at the Billabong XXL Awards, Doug Young (Chch) woke up to write his local surf report and realised what he was looking at on the swell map, a chance of a lifetime to surf the break for the third time. Doug had one hour to organise his life. Doug grabbed young surfer Sam Hawke (Chch), rushed to the airport and managed to get the only flight heading to Tahiti for the week.

Reaching Tahiti late and exhausted Doug and Sam slept on the beach and woke up to what locals are calling the biggest day ever in Teahupo'o. 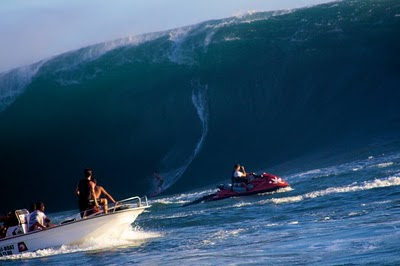 "I scored one of the most amazing barrel rides of my life only to be swallowed by the foam ball and dragged across the reef. I then had another five more waves on the head before finally being rescued by the jet ski. It was a very special day with many of the best big wave chargers from all around the world claiming to have ridden the best waves of their lives." Doug recalls.

Having the right tow partner plays a crucial role in riding these waves; one small mistake by the driver can turn into a big mistake for the surfer. This was not however the case for Young and Hawke, after several hours flying and sitting in seats that were their lucky numbers they didn't want there luck to run out.

Wearing as much green as they could on St Patrick's Day, it was the luck of the Irish when Young raced toward the largest set wave of the day and towed Hawke into the biggest, gangliest wave of his life. The wave of the day which everybody called the biggest ever ridden at Teahupo'o! After getting washed into the lagoon Young pulled Hawke out of the water, struggling for breath, blood rushing out of his nose only to be greeted by a standing ovation from an all star cast of surfers including; Shane Dorian, Ian Walsh, Vatea David, Carlos Burle, Raimana Van Bastolaer and the rest of the local crews.

Full story coming out on www.surf.co.nz.

A special thanks to
Gravis
Byrning Spears
Quiksilver New Zealand